From Trees to Plastic: The Evolution of the Toothbrush

Nothing symbolizes oral hygiene more than the toothbrush. The humble yet powerful device that’s responsible for keeping our teeth clean is considered a modern mainstay. The toothbrush is anything but “modern,” though!

Toothbrushes first appeared over 5,000 years ago and were used by ancient civilizations. Modern forms of the toothbrush didn’t appear until 1938, marking the latest chapter in a long and storied history. As it turns out, humans have been obsessed with keeping their mouths and teeth clean for a long, long time.

From the first recorded toothbrush to the awesome oral hygiene innovations of today, let’s go on a journey through the evolution of the toothbrush. After all, it’s pretty darn important to keep our teeth clean and mouths healthy. The earliest form of the toothbrush surfaced around 3500 B.C. in “the cradles of civilization”: Ancient Egypt and Ancient Babylon. It was a Miswak chewing stick that was made from the branches of the evergreen Salvadora persica tree, known for its antiseptic and healing qualities.

Using it was a bit more time-consuming than today: People chewed on one end of a chewing stick until the ends separated into a thick clump of bristles, forming a brush. They then used the brush to clean the teeth.

Chewing sticks might not sound attractive to modern ears, but they worked well for removing food and plaque, and still do today. People still use Miswaks today and these adherents to the old ways believe they are superior to modern toothbrushes. Miswaks were the only recorded toothbrushes in the world until 1498 when the Chinese came up with the bristle toothbrush.

By the 1500s, keeping your teeth clean had become a worldwide obsession. Chinese “dentists” opened up new possibilities when they started using hog’s neck hairs and pasting them onto bamboo sticks and animal bones. These “boar bristles” were pretty similar to modern toothbrushes. Meanwhile, in Europe, locals dipped linen in sulfur oil and salt solutions with which they rubbed on their teeth to clean off the grime.

It wasn’t until 1780 that William Addis, while doing time in a prison cell, figured out how to attach bristles to bone to make a toothbrush. He used bones left over from dinner and bristles he got from the guards, combined them, and created a teeth cleaning tool similar to the Chinese boar bristle toothbrush. This marked the introduction of the bristle toothbrush to Europe. The first toothbrush patent was filed by the entrepreneur H.N. Wadsworth in 1857, paving the way for mass production which started in 1885. By the time the First World War rumbled across the globe, rapid toothbrush production methods had been greatly refined. Molds were being created in the shape of toothbrush handles and filled with celluloid.

Manufacturers would simply dip the boar bristles into the liquid and then cool it. Boar bristles continued to be the norm for toothbrushes until 1938 when nylon was first introduced into the production process.

1938-Today: The age of the modern toothbrush In 1938, Dupont de Nemours introduced nylon bristles, and the first toothbrush to use this nylon material was called Doctor West’s Miracle-Tuft Toothbrush. It marked the end of the almost four-hundred-year-long era of boar bristle toothbrushes.

This change could not have come sooner because, by this time, regular routine teeth brushing was mainstream, mainly thanks to soldiers returning from the Second World War. When soldiers got home, they brought their brushing habits with them. Their families and friends in the neighborhood got influenced by this new habit and soon took it up themselves. Also, as early as 1939, the first electric toothbrush was invented and later released to the public in 1960.

Today, the evolution of the toothbrush continues. We may not have seen any major recent changes to the design of toothbrushes, but we have a lot of cool innovations coming out. For example, we have sensor-loaded toothbrushes that map your mouth, identifying which areas need to be focused on. No matter what benefits you’re seeking, choosing a toothbrush that fits comfortably and allows you to hit all areas for an effective clean is most important!

Clean the toothbrush that cleans your mouth 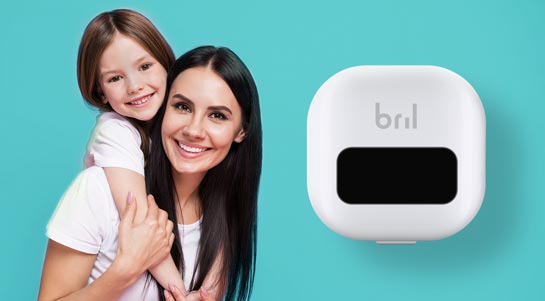 No matter how advanced your toothbrush is, it’s still one of the dirtiest things in your bathroom! Think about it – it cleans the germs that fill your mouth twice (I hope!) a day. Fortunately, we now have Bril, the UV light technology portable toothbrush case that kills 99.9% of the germs living on your toothbrush in seconds. Germs such as diarrhea, MRSA, and flu-like viruses can live on your toothbrush. Yuck! Bril uses the same UV sterilizing technology trusted by hospitals and the International Space Station. Don’t delay, experience the deep cleaning powers of Bril today.

What are the most memorable toothbrushes you’ve seen so far? Tell us and share this fascinating read with your friends and family!

One comment on “From Trees to Plastic: The Evolution of the Toothbrush”